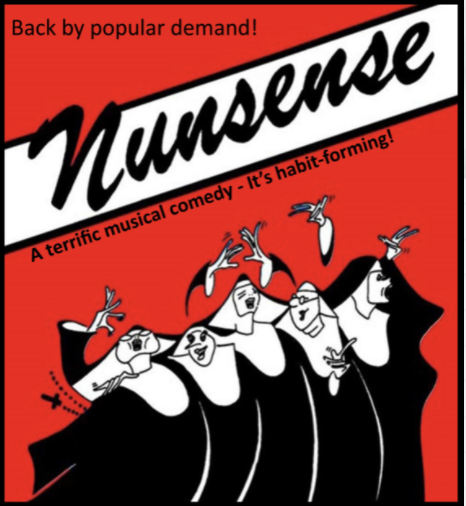 ​Produced through special arrangement with Concord Theatricals, NY, NY.
The Order of the Little Sisters of Hoboken was founded in the seventh century by Saint Wilfred, a bishop of England. He established the first convent and the school known as the Wilfred Acanemy. His motto was "We don't teach beauty - we radiate it!" Many years later a small group of pioneering sisters set out for America to establish a motherhouse in Cleveland. But they got off the plane in Newark by mistake. The order was "found" by the Newark Airport Police and the new motherhouse was established in Hoboken, New Jersey. It was at the time that the Order of Saint Wilfred elected to change the name to the Little Sisters of Hoboken and they have been affectionately known as the "Little Hobos" ever since. It was from this convent that Sister Mary Cardelia, Sister Mary Hubert and Sister Robert Anne, set sail for the Mediterranean to establish their leper colony. Today the order has both nuns and brothers as members - all doing various good works in the Diocese of Newark. They also operate Mount Saint Helen's School in Hoboken.
Click here to read the digital playbill for the show, or, just text the word Nunsense to 203-872-5599 to see the playbill on your phone.

Our 31st Season
Curtain Call’s Shakespeare on the Green 2021:

​Presented in part with The Royal Green RestaurantIn cooperation with the City of Stamford and the Stamford Golf Authority.


Witness the birth of a nation as our forefathers struggle to craft the Declaration of Independence in this Tony Award-winning BEST MUSICAL. 1776 is funny, insightful and compelling story-telling with a striking score. 1776 puts a human face on the pages of history as we see the men behind the national icons: proud, frightened, uncertain, irritable, charming, often petty and ultimately noble figures, determined to do the right thing for a fledgling nation. A terrific and fun history lesson for the whole family set to music!

Come to New York's Lower East Side, visit with Izzy, and sit a spell with her Bubbie (grandmother) in this romantic comedy as Izzy yearns to trade her traditional Jewish upbringing for the slick glamour of Manhattan's literary scene. Learn from Bubbie's old-world wisdom as she encourages Izzy to find real happiness by choosing a nice pickle salesman from the neighborhood over a sophisticated author. Crossing Delancey feels suffused with female energy, putting women’s concerns first, and it’s simultaneously sharp and affectionate.